Meet The Members Of Your Transatlantic Expedition Team 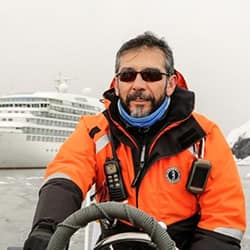 For the past twenty years, Ignacio has worked almost exclusively in the expedition travel industry, bringing nature closer to travelers interested in expanding their knowledge about Antarctica, the Amazon and other wild and exotic destinations of our planet.

His travels started very early in life with trips every summer to the Atacama Desert in Chile for the simple purpose of visiting family. These trips turned into favorite events and expanded into trips to the Brazilian Amazon, where later Ignacio enrolled into the master’s degree program of Tropical Ecology in Manaus, the heart of the Amazon. The Amazon back in the 1990’s was a crossroads of expedition vessels and he found himself working on his first expedition vessel. Having found his calling, he joined in as many trips as he could, traveling from Southeast Asia to Antarctica, and around the world from South America to Oceania and back again.

Since the beginning of his career in expedition cruising, Ignacio has spent at least twenty uninterrupted seasons in Antarctica, including the Peninsula, Ross Sea and sub-Antarctic Islands in the South Atlantic, Australia and New Zealand.

He holds a boat handler’s license, acquired in the harsh waters and rugged beaches of southeastern South Africa. He enjoys being in small boats in any destination around the globe but preferentially in the seas of Antarctica where he looks forward to sharing his expertise and knowledge of the natural history of the white continent with fellow travelers.

Dr Colleen Batey is Senior Lecturer in Archaeology at the University of Glasgow, Scotland. For the past 40 years she has been involved in research on the Viking Age in Scotland, Scandinavia and the North Atlantic, both as director of excavations and teacher. Since 2004 this has been combined with expedition cruising for several companies, both as expedition team member and guest lecturer.

For several years she was curator of Archaeology for Glasgow Museums, the largest metropolitan museum service in the UK. As part of that work, she was the British co-ordinator of Viking loan material for the highly successful Smithsonian exhibit on the Vikings: North Atlantic Saga, which toured widely in the US starting in the millennial year 2000 and gaining several million visitors throughout its run.

As a University teacher Colleen works with students from Undergraduate to Doctoral level in Viking subjects and in addition, is committed to public outreach in communities far and wide. She has published extensively both books and journal articles.

As an expedition team member and lecturer, she has travelled extensively in Scandinavia and the Baltic, the Black Sea, the British Isles and North Atlantic, from the Scottish Isles through the Faroes, Iceland, Greenland and onto Newfoundland. Additionally a full transit of the North West Passage was achieved in 2014.

She is based in Argyll, in the beautiful – but wet – region of Western Scotland, surrounded by lochs and mountains.

Luciano has lived and worked in the beautiful mountains and glaciers of Patagonia for the last 20 years. He has a wealth of experience in adventure travel and eco-tourism; leading, guiding, and lecturing groups. From expeditions across the Patagonian Ice-Field and Ice Walks on the Perito Moreno Glacier to treks in Torres del Paine and Tierra del Fuego, Luciano has been working as a mountain guide, ski guide, tour leader, naturalist guide, and birding guide, across Argentina and in many other countries throughout the past 20 years.

Birding and glaciers are his two main passions: a keen birder since a very early age, and many years of experience working around, on, under, and close to glaciers.

Luciano is based in Los Glaciers National Park, Patagonia, Argentina and works as Director and board member of Glaciarium/Museo del Hielo Patagonico – the largest and one of the very few Glacier museums in the world.

Luqui as most people call him, has been working in both Polar Regions extensively, sharing his passion for ice, glaciers and wildlife.

Luciano has been certified in a variety of specialties: as Ski Patrol with extensive training in skiing, snow safety, avalanche awareness and first aid; as a Birding Guide by Argentina’s National Ornithological Society, as a Mountain Guide and Climbing Instructor (Rock & Ice) by the Argentina Mountain Guide Association and Buenos Aires Alpine Club respectively; also by Argentina’s Coast Guard to operate sailboats, and small vessels.

Luciano’s diverse jobs and interests have taken him to many destinations and wilderness areas around the world. 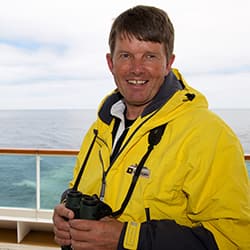 A Johannesburg native, Greg was raised on a farm in South Africa, where he developed an entrepreneurial spirit that had him raising tropical fish and crafting skateboards for sale while still in school. Following his schooling and military service, he fueled his dual interests in business and adventure by starting a SCUBA diving center at the Heads in Knysna on South Africa’s Garden Route and later running a bush camp and dive resort in Mozambique, acquiring his yacht skipper’s and master’s certificates along the way.

After eight years as a diving guide, he left the sea-coast behind and moved to a mountain town called Dullstroom high in the Mpumalanga where, along with running a tour business, he has organized civic adventure events including mountain bike races and fly-fishing tournaments that have successfully attracted adventure and outdoor lovers to the area. Greg has explored almost every corner of Southern Africa and several of the Indian Ocean islands. He has over 5000 dives in the Indian Ocean and Red Sea; hiked most of South Africa’s trails; traveled over 14,000km by off-road motorbike and has kayaked many of the country’s rivers. He has viewed much of the country from the air as a paraglider, even sharing a thermal one-day with a pair of majestic black eagles.

Greg has used this passion for adventure and his wealth of experience to accumulate tremendous knowledge about the natural world. He has developed a keen eye that benefits his photography. Naturally gregarious and an avowed “people person,” Greg’s respect, admiration and love for the natural world also make him a responsible adventurer to the core of his being. In amongst all his interests, adventures and business ventures, Greg is the proud father of five children ranging from 12 to 23.

During your Ventures voyage, expedition team members will be equipped with superior quality binoculars manufactured by Swarovski Optik to enhance your viewing experience on deck and during Ventures by Seabourn excursions. Swarovski Optik binoculars will also be available for sale on board.

*Subject to change without notice.